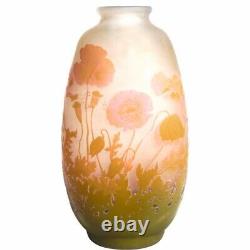 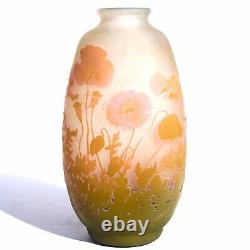 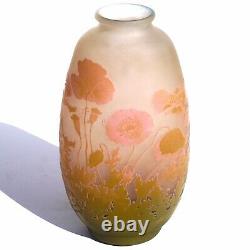 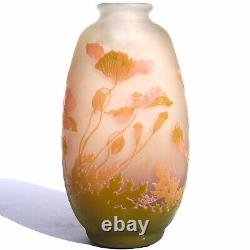 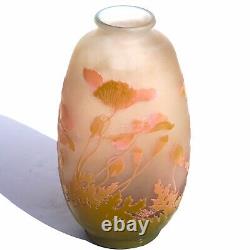 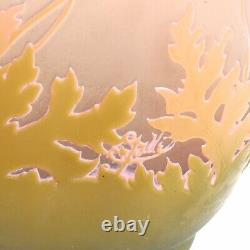 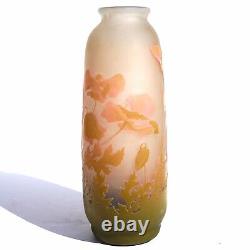 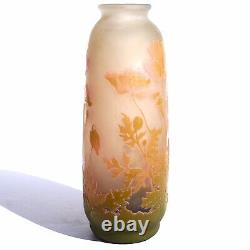 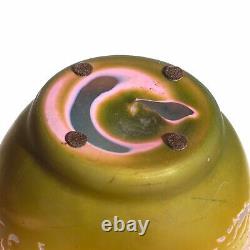 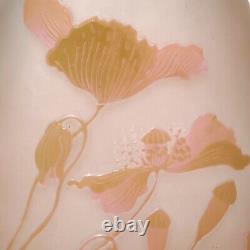 Emile Galle wheel carved and acid etched cameo glass vase. This particular case has killer colors and outstanding workmanship. The pink and green combination on the cream background remind you why Galle was originally a botanist.

A nice example at over 12.5 inches and fat. Émile Gallé, born May 8, 1846, Nancy, Francedied Sept. 23, 1904, Nancy, celebrated French designer and Pioneer in technical innovations in glass. He was a leading initiator of the Art Nouveau style and of the modern Renaissance of French art glass.

The son of a successful faience and furniture producer, Gallé studied philosophy, botany, and drawing, later learning glassmaking at Meisenthal, France. After the Franco-German War (18701871), he went to work in his fathers factory at Nancy. He first made clear glass, lightly tinted and decorated with enamel and engraving, but he soon developed the use of deeply colored, almost opaque glasses in heavy masses, often layered in several thicknesses and carved or etched to form plant motifs. His glass was a great success at the Paris Exhibition of 1878, and he became known as a spirited designer working in contemporary revival styles. Gallés strikingly original work made a great impression when it was exhibited at the Paris Exposition of 1889.

Over the next decade his glass, reflecting the prevailing interest in Japanese art, became internationally known and imitated. It contributed largely to the free, asymmetric naturalism and symbolistic overtones of Art Nouveau.

He employed wheel cutting, acid etching, casing i. Layers of various glass, and special effects such as metallic foils and air bubbles, calling his experiments marqueterie de verre (marquetry of glass). At Nancy he led the revival of craftsmanship and the subsequent dissemination of crafted glass by way of mass production. At the height of its productivity, during the late 19th century, his workshop employed nearly 300 associates. He attracted numerous artisans, including the Art Nouveau glassmaker Eugène Rousseau.