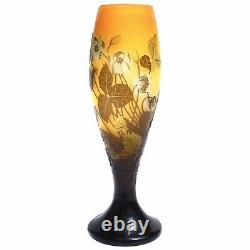 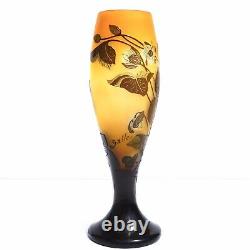 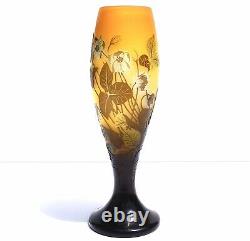 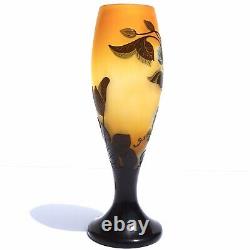 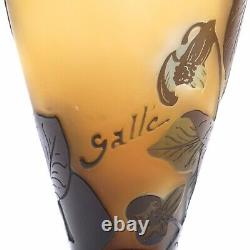 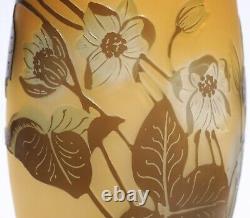 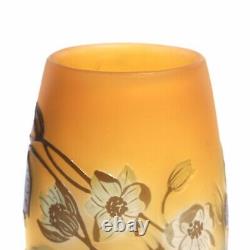 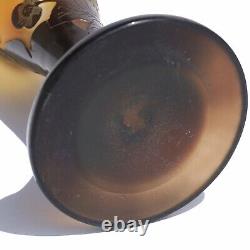 One of my favorite Galle forms; simple, delicate yet perfect! The thick dark foot represents earth with an outgrowth of beautiful flowers.

Emile Gallé was originally a botanist so when he started blowing glass he naturally almost always incorporated his love of floral design. These gorgeous blue flowers are window paned as a bonus. That means that they are etched so that light can easily pass through them; an absolutely wonderful effect. Lastly; the milky graduated yellow background makes this design pop.

His father, Charles Gallé, was a merchant of glassware and ceramics who had settled in Nancy in 1844, and his father-in-law owned a factory in Nancy which manufactured mirrors. His father took over the direction of his mother's family business, and began to manufacture glassware with a floral design. He also took over a struggling faience factory and began make new products. The young Gallé studied philosophy and natural science at the Lycée Imperial in Nancy.

At the age of sixteen he went to work for the family business as an assistant to his father, making floral designs and emblems for both faience and glass. In his spare time he became an accomplished botanist, studying with D. Godron, the director of the Botanical Gardens of Nancy and author of the leading textbooks on French flora.

During this time he became acquainted with the painter, sculptor and engraver Victor Prouvé, an artist of the romantic "troubadour" style, who became his future collaborator in the Nancy School. He enlisted for military service in the Franco-Prussian War in 1870, then was demobilized after the disastrous French defeat in 1871 and the French loss to Germany of much of the province of Lorraine, including Meisenthal where he done his apprenticeship. Thereafter the Cross of Lorraine, the patriotic symbol of the region, became part of his signature on many of his works of art. After his demobilization Gallé went to London, where he represented his father at an exhibition of the arts of France, then to Paris, where he remained for several months, visiting the Louvre and Cluny Museum, studying examples of ancient Egyptian art, Roman glassware and ceramics, and especially early Islamic enameled glass, a technique which influenced his own later work.

His father Charles continued as head of the company, but Émile gradually took charge of the design and production, in 1873 he took up residence in La Garenne ("the rabbit warren"), the three-story neoclassical house built by his father and surrounded by gardens. The item "Emile Galle Cameo Art Nouveau Floral Vase" is in sale since Monday, June 22, 2020. This item is in the category "Pottery & Glass\Glass\Art Glass\French\Emile Galle". The seller is "avantiques" and is located in Dallas, Texas. This item can be shipped worldwide.