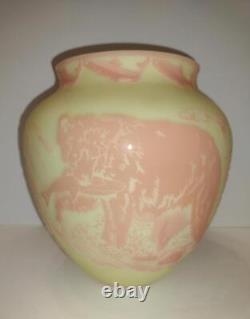 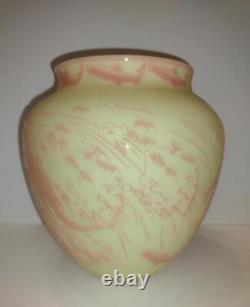 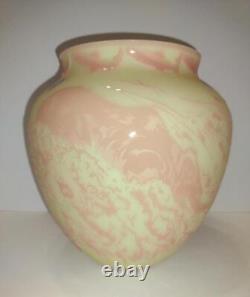 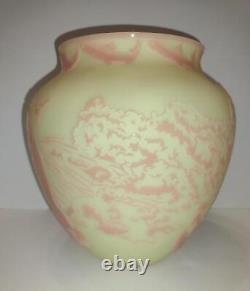 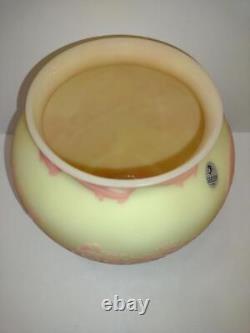 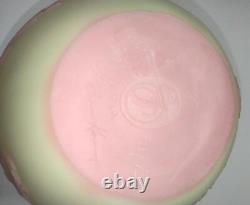 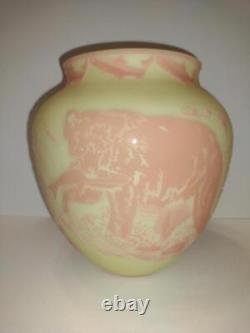 FENTON GLASS BURMESE CAMEO CARVED "SALMON RUN" VASE SIGNED KELSEY MURPHY ROBERT BOMKAMP LIMITED EDITION #11/75 Here is a gorgeous studio art glass vase made by Fenton and sandcarved by Kelsey Murphy and Robert Bomkamp. The piece was limited to only 75 pieces and this one is number 11. It is made of Fenton's popular yellow burmese glass and carved in a pattern called "Salmon Run", featuring two bears, one on each side, catching salmon in a river or flowage.

The rim even has a unique repeating pattern of salmon fish all around it. The burmese glass has great coloring with the background being satin and the bears and other details are glossy and in raised relief. This piece is absolutely breathtaking and words can't really describe it. This outstanding vase measures approximately 8" tall by 7" in diameter at the widest and 5 in diameter at the rim. It is in excellent condition with no chips crakcs or damge.

It is in excellent condition with no chips cracks or damage. Auctiva offers Free Image Hosting and Editing. This item is in the category "Pottery & Glass\Decorative Pottery & Glassware\Vases"." and is located in this country: US.